From sign to word: One size does not fit all.

INTRO:
Early intervention experts Susan Foster-Cohen from the Champion Centre in Christchurch and Anne van Bysterveldt from the University of Canterbury have found some interesting patterns when researching the use of sign language alongside developing speech.

In New Zealand, most children with Down syndrome are explicitly encouraged to use manual signs (either home signs or NZSL signs) as a means to help children communicate and encourage their spoken word development.

The value of this approach is now well established thanks to the work of researchers such as Sue Buckley, Carl Dunst, and others.

However, we still don’t know much about how individual children use their signs and words as they move through early childhood and what parents and teachers need to know in order to encourage the transition to spoken words.

In our research, we have been examining the make-up of children’s vocabularies and how they change over time, because children appear to vary greatly in the degree to which they use signs, both initially and over time.

Some children start out using (almost) exclusively sign and then gradually transition to only using spoken words. Other children stay with sign as their primary means of communication or they operate with a bilingual system where they use both sign and word for the same thing.

We asked parents of children with Down syndrome attending the Champion Centre to complete the New Zealand Communicative Development Inventory (CDI) every six months from the age of two-and-a-half or three to when they went to school.

The CDI has a list of 675 items that are typical of pre-school children’s vocabulary (including words for food, animals, places, people, colours, etc.) and we gave parents the option of indicating whether their child had a sign, a word, both, or neither for each item.

All the children were growing up in spoken language families (i.e. none were using a full sign language).

We simply took the parents’ perspective on their child’s communication, which they knew so much better than we could ever know as researchers.

We are immensely grateful to the parents for completing this rather tedious task so often as part of our study. 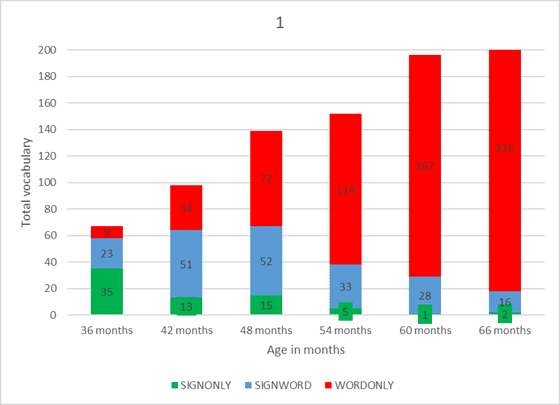 In the first graph you can see data from a child who started early in her transition from sign to word, progressing steadily over the time period from 36 to 66 months, and went on to school using mostly words and just a few signs, most of which had a word equivalent as well.

As a strongly oral language user, this child is likely to be able to use her spoken language in the classroom and to be understood by her classmates and teachers.

She does not, however, have a very large vocabulary overall, as measured by the CDI, having only 234 of the 675 possible items that can be ticked, so we would hope to see her teachers encourage her vocabulary to grow now she has the transition to spoken words sorted. In the second graph we see a child who has a larger vocabulary at school entry (384 items) and a greater proportion are signs.

It does appear, however, that this child ‘got the hang of’ spoken words somewhat later, fairly shortly before transitioning to school and will be using both sign and word with their teachers and classmates.

Here we would hope that the school welcomes the use of signs and supports what looks like the beginning of a strong transition to spoken words.

Like other researchers before us, we found a range of patterns such as these. In addition to the two patterns shown here, we also found some children who never, or almost never, used sign but who still succeeded in building a spoken vocabulary and children who used only sign and did not succeed in developing spoken words before they went to school. This last pattern only occurred where the overall vocabulary was very small.

However, unlike other researchers, we did not find a minimum of signs was needed before spoken words emerged. Indeed, some children in our study were able to use spoken words as part of even a very small vocabulary.

The important points to take from our work, which we have presented at national and international conferences and are currently writing up for publication, are:

(a) that each child with Down syndrome is an individual and will use signs and words to engage in the key relationships in their lives;
(b) that parents and others should offer and encourage both signs and words when engaging with children, so that the child can take and use what makes the most sense to them; and
(c) that teachers and speech-language therapists should know about the early developmental path of sign to word of each child so that they can support the continued growth of the child’s communication in school and beyond.

We have known for some time now that language development continues throughout childhood, adolescence and into adulthood for people with Down syndrome and that continuing to support that development is vital.

That lifelong trajectory starts with the early years we study at the Champion Centre.

Dr. Susan Foster-Cohen is Director of the Champion Centre and Adjunct Associate Professor of Linguistics at the University of Canterbury.

Dr. Anne van Bysterveldt is a Speech Language Therapist and Senior Lecturer in Early Intervention at the University of Canterbury.